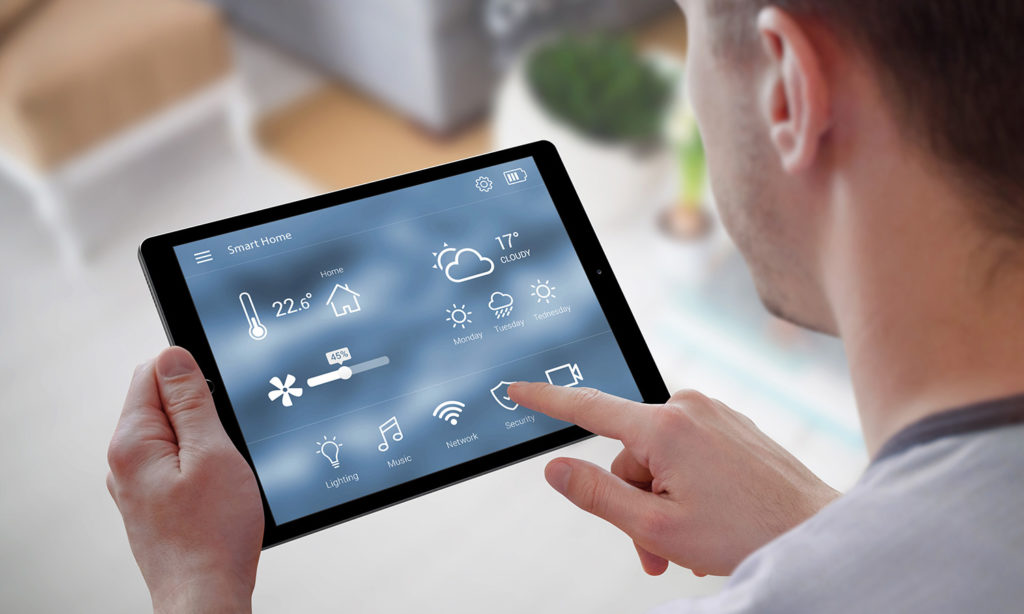 KNX is the internationally recognized and worldwide standard for smart home automation and building control.

All About KNX Smart Home and Smart Building Automation

KNX is technology which controls the automation of integral functions of any residential, commercial or industrial building such as  HVAC, lighting systems, multimedia, security, energy management and more.

In this article you will learn everything you need to know about KNX technology, how KNX works and why you should definitely consider integrating KNX systems either in existing buildings or during construction for your next building project. 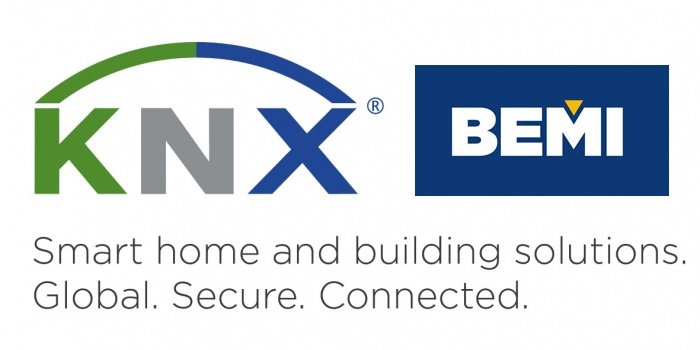 In order to transfer control data to all building management components (or smart home devices/functions), a system is required that avoids the problem of having isolated devices speaking ‘different languages’.

KNX is also the world’s only open standard for home and building control and is compliant to EN 50090, EN 13321-1 and ISO/ IEC 14543, and has been submitted for Australian standards approval.

Unlike proprietary protocols (which only the manufacturer supports), KNX is an open worldwide standard with over 300 different manufacturers producing products that all inter-work and operate together seamlessly.

KNX works by ensuring all components, devices, features and functions of any building (or outdoor space) communicate via one common language instantly and remotely.

How Does KNX Work?

The KNX bus line is the main central nervous system for all automatons. It is a green cable which is installed in addition to the conventional mains supply during a new build or renovation project.

All of the various building technology elements are then connected to one another vis the main KNX bus line in accordance with the KNX standard for building automation.

The cable system is then managed by such things as sensors, detectors, parameters, etc. — which can then be conveniently controlled by end users with a laptop, smart phone or tablet device.

The KNX bus is routed in parallel to the electrical power supply to all devices and systems on the network linking: 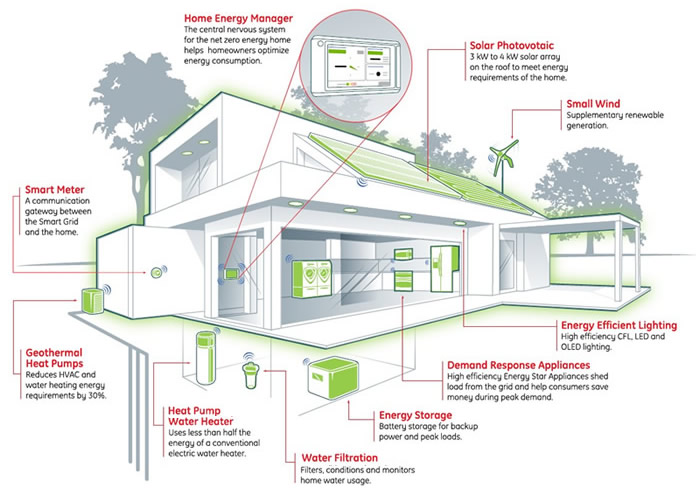 NOTE: Classifying devices as either “sensor” or “actuator” is actually outdated and simplistic.

Application software, cmobined with system topology and commissioning software, is loaded onto the devices via a system interface component.

Installed KNX systems can be accessed via LAN, point to point links, or phone networks for central or distributed control of the system via computers, tablets and touch screens, and smartphones.

Some of the key features of the architecture for KNX systems are:

What Building Features/Functions/Devices/Appliances can KNX Control and Manage? 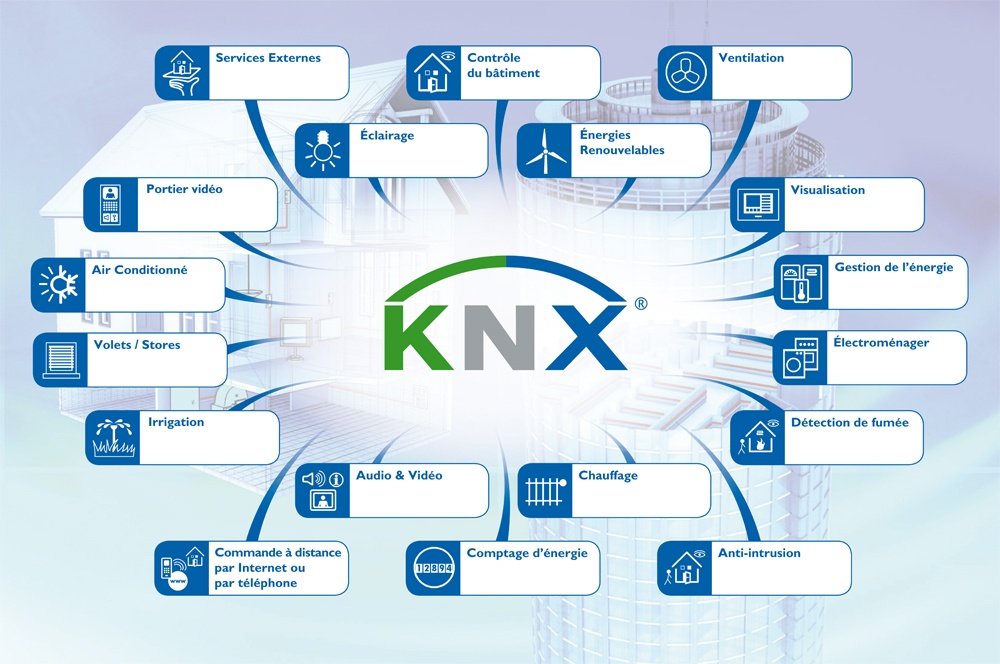 Any product labeled with the official KNX trademark is based on conformity testing carried out by KNX accredited third party test labs. 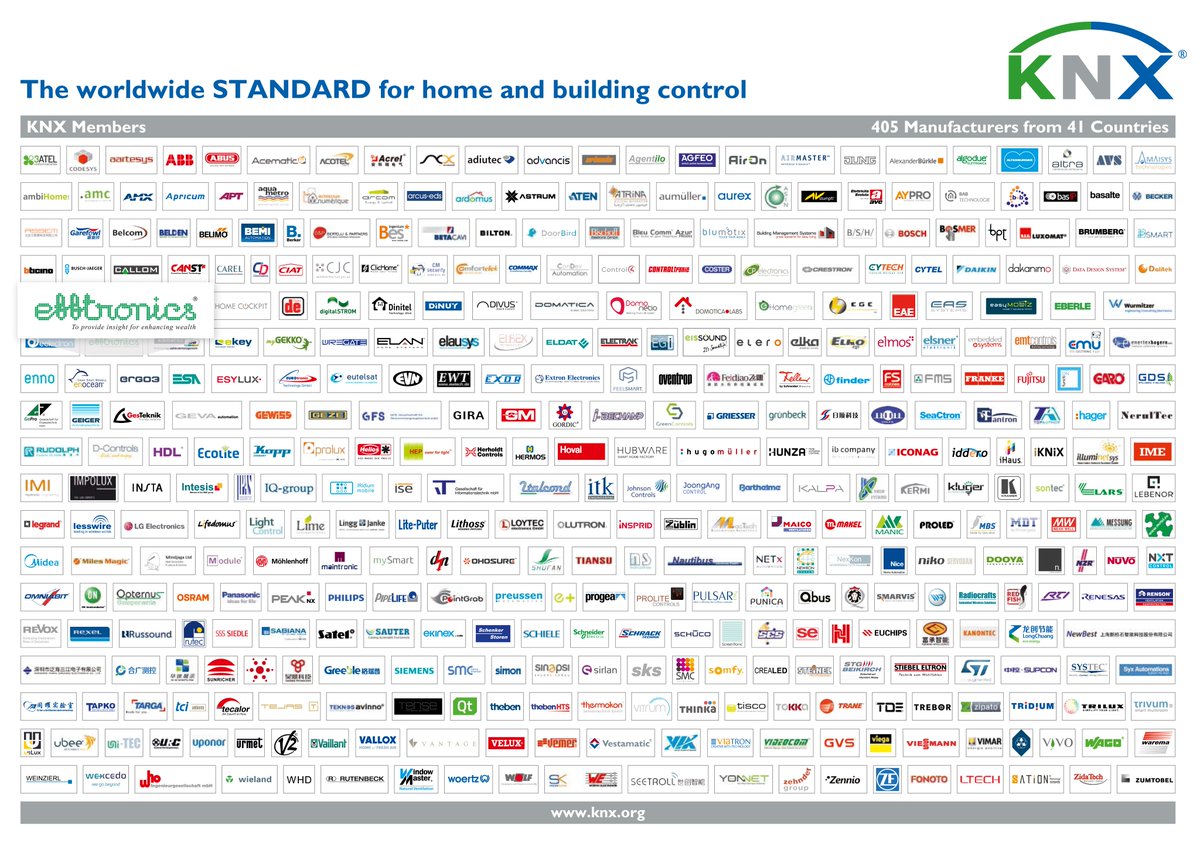 During the testing stages for KNX compatible products, the device is checked that is able to support the KNX protocol and useful data is coded according to the global KNX standardized Data types.

How is KNX Energy Efficient and How will it Lower Energy Costs? 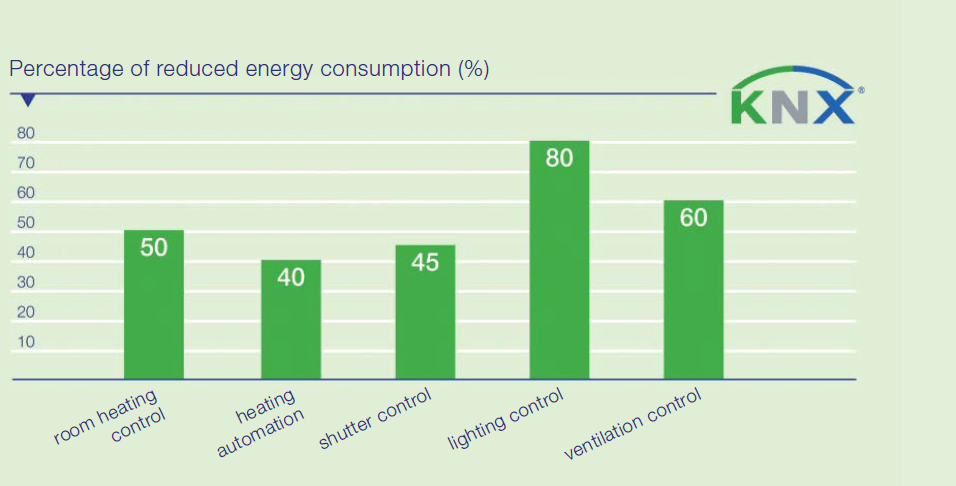 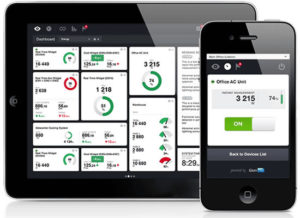 What Type of Buildings Can a KNX System Be Installed In? 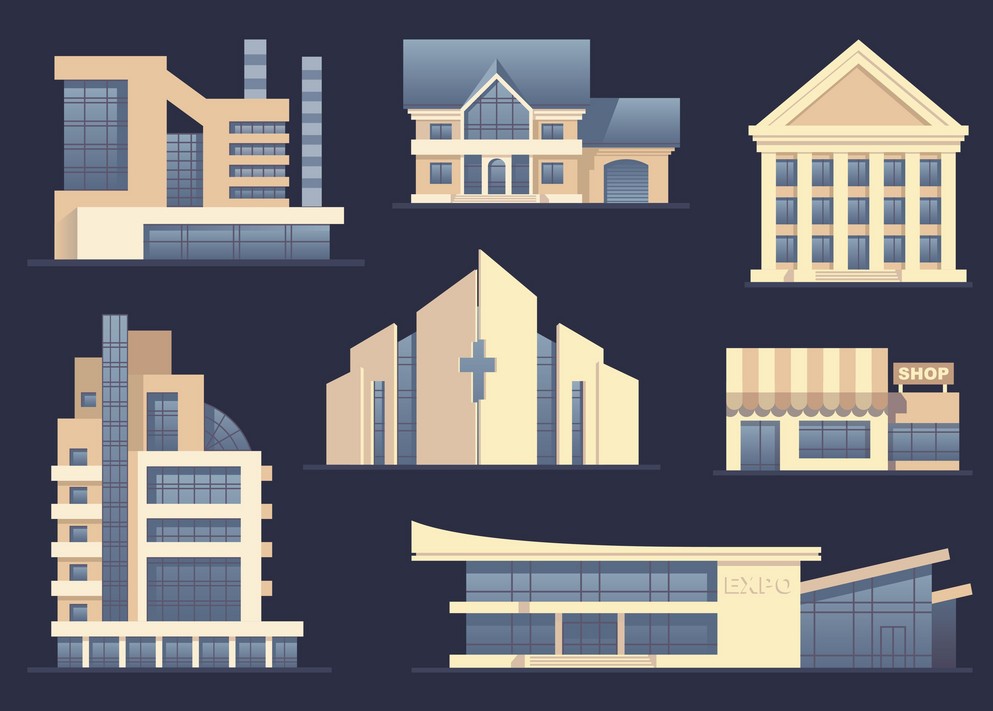 KNX infrastructure and KNX smart building systems can be used in almost any building or outdoor space — from a small house to a large shopping mall or industrial complex.

Can KNX Systems be Retrofitted in Existing Building Structures and is KNX Technology Future-Proof? 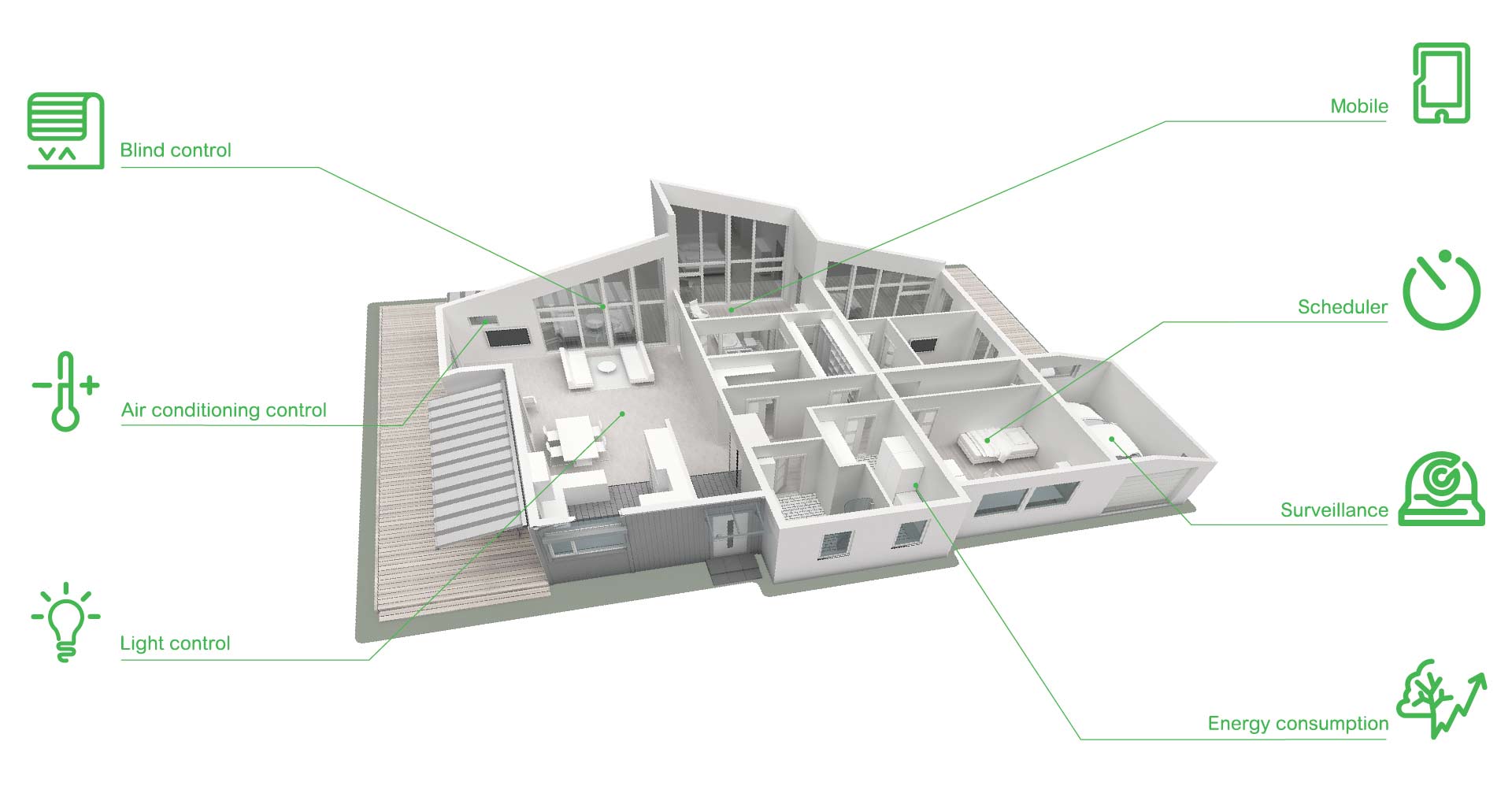 The KNX system is a versatile smart-home (or smart-building) option and can be retrofitted or installed in existing building structures with relative ease.

The KNX system is also an expandable system with a future-proof standard. This means any KNX system can be expanded or reprogrammed with ease when upgrades to the system are needed or wanted.

Once a KNX system has been installed, the system then adapts to individual requirements whenever lifestyles, preferences or working conditions change.

KNX technology offers the perfect long-term solution for a variety of different residential, commercial and industrial building projects as the entire system can be easily modified as the technology quickly develops and new KNX compatible products are introduced into the marketplace.

What are the Main Benefits of Using KNX Technology Besides Energy Savings? 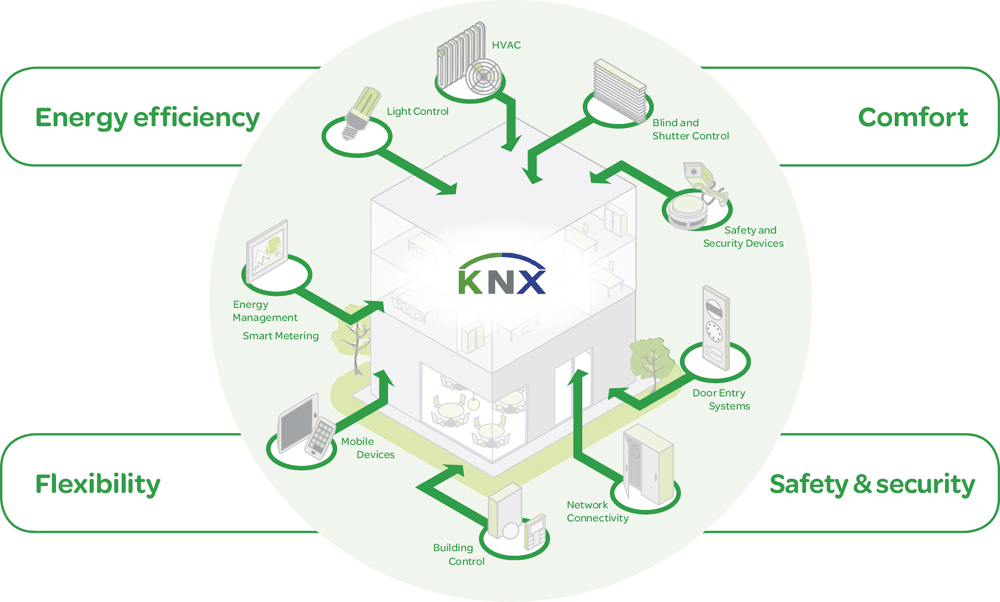 The KNX technology is the result of extensive knowledge and experience gained over the last 15 years with the predecessor technologies to KNX (i.e. the European Installation Bus (EIB), the European Home System (EHS) and BatiBUS).

Below are 10 main Benefits of using KNX systems for smart-home and smart-building automation.

ISO/IEC Approved the KNX technology as the International Standard ISO/IEC 14543-3 in 2006.

CENELEC Approved the KNX technology as the European Standard EN 50090 in 2003.

ANSI/ASHRAE Approved the KNX technology as the US Standard ANSI/ASHRAE 135 in 2005.

The KNX certification process ensures that different products of different manufacturers operate and communicate with each other seamlessly.

This ensures a high degree of flexibility in the extension and the modification of KNX installations.

The KNX Association requires a high level of production and quality control during all stages of a KNX product’s life.

Therefore all KNX manufacturing members have to show compliance to ISO 9001 before they even can apply for a KNX product certification.

Besides the manufacturer compliance to ISO 9001, KNX  products also have to comply with the requirements of the European as well as International standard for Home and Building Electronic Systems.

In any case of doubt, the KNX Association is entitled to have certified products re-tested or can require additional manufacturer test reports underlying the declaration of hardware conformity.

The PC software tool ETS allows the planning, engineering and configuration of all KNX certified products.

The tool is manufacturer independent, meaning the system integrator is able to combine products of different manufacturers to one installation.

5. KNX can be used for all applications in smart home and building automation control.

KNX improves comfort and security and contributes heavily to energy savings and climate protection (up to 50% for lighting control and the same amount for heating applications).

6. KNX can be used in a a variety of residential, commercial, industrial and outdoor settings.

KNX can also be used and integrated in both new and existing building structures.

KNX installations can therefore be easily extended and adapted to new needs/requirements, with minimal time and financial investment (e.g. when new tenants move into a commercial building).

The different modes are:

Easy installation (E-Mode): Configuration is done without the help of a PC but with a central controller, code wheels or push buttons. E-Mode compatible products normally have limited functionality and are intended for medium size installations.

System installation (S-Mode): Planning of the installation and configuration is done via a PC with the installed ETS Software, whereby the manufacturers’ product data is contained in the ETS database. S-mode is intended for KNX certified planners and contractors and for large size installations.

Each communication medium can be used in combination with one or more configuration modes.

This allows for each manufacturer to choose the right combination for the targeted market segment and application.

Twisted pair (KNX TP): KNX is transmitted across a separate bus cable, hierarchically structure in lines and areas.
Power Line (KNX PL): KNX is transmitted on the existing mains network.
Radio frequency (KNX RF): KNX is transmitted via radio signals. Devices can be uni- or bidirectional.
IP/Ethernet (KNXnet/IP): This widespread communication medium can be used in conjunction with the KNXnet/IP Specifications, which allow the tunnelling or routing of KNX frames encapsulated in IP frames.

9. KNX can be coupled with other systems.

KNX systems can be mapped to BACnet objects (as documented in the international standard ISO 16484-5) or offers the possibility to interface with the DALI technology.

10. KNX is independent from any hardware or software technology.

KNX can be realized on any microprocessor platform.

KNX can be implemented from scratch. However, for easy market entrance, KNX manufacturers can also take recourse to providers of KNX system components.

For certified KNX members, it is completely FREE of additional royalty fees.

BEMI is an electrical planning agency that offers lighting and KNX design services for residential and commercial building projects.

This website uses cookies to improve your experience while you navigate through the website. Out of these cookies, the cookies that are categorized as necessary are stored on your browser as they are essential for the working of basic functionalities of the website. We also use third-party cookies that help us analyze and understand how you use this website. These cookies will be stored in your browser only with your consent. You also have the option to opt-out of these cookies. But opting out of some of these cookies may have an effect on your browsing experience.
Necessary Always Enabled
Necessary cookies are absolutely essential for the website to function properly. This category only includes cookies that ensures basic functionalities and security features of the website. These cookies do not store any personal information.
Non-necessary
Any cookies that may not be particularly necessary for the website to function and is used specifically to collect user personal data via analytics, ads, other embedded contents are termed as non-necessary cookies. It is mandatory to procure user consent prior to running these cookies on your website.
SAVE & ACCEPT